But last night, one of them messaged me to say that the weather report showed a high chance of thunderstorms during the time we would be running.

12 miles is a long time to be getting rained on.

And who wants to run in the rain?

To be honest, I really wanted to throw my hands up in the air and say, “O.K. girls! Nevermind.  Looks like this Friday is not gonna be a good day for a long run. Stay home and enjoy the extra sleep.” But I had already put myself out there. I felt like I needed to maintain my “athletic girl” posture so I said, “Alright, well let’s hope for the best and see what the weather is doing in the morning.”

I spent a few minutes laying out running clothes, preparing my water bottle, and packing my energy snacks and went to bed.

Fast forward to 4:11 a.m. I stared at my phone with a look of disbelief.  Did I really get up at dark-thirty in the morning to probably message my running friends and cancel.  I logged onto to the Facebook Group and said instead, “It’s not raining here… yet. Ya’ll still want to try?”

Soooooo secretly hoping that they, like me, wanted to avoid the possibility of rain more than relish in the accomplishment long run.

Both of them were willing to run in the rain.

I dragged myself up and out the door… totally thinking that I was going to drive to our meeting spot only to turn around and come back home when it started pouring, lightning, and thundering away.

I was totally ready to through in the towel due to the possibility of bad weather.

I was willing to throw away the sense of accomplishment and almost 2000 calories burned because I was afraid of what might happen.

I was willing to get rid of my #milesformercy run.

How quickly we give up with the slightest chance of bad weather.

I almost worried my way into a sense of regret when hours later, I realized that it didn’t rain at all.

How often does this happen to us in everyday life?

How often do we avoid the possibility of success because we are too focused on the fear of failure?

How often do we stay still instead of moving ahead, simply because we’d rather believe the bad stuff than believe the chance of the good.

How often to you refuse to live with hope?

I do it all the time.

I expect the worst instead of expecting the best.

I sit still instead of forging ahead.

This morning taught me something.

There are probably mounds of opportunities that I’ve missed because I didn’t forge ahead in hope.

I want to challenge you to live with hope today. 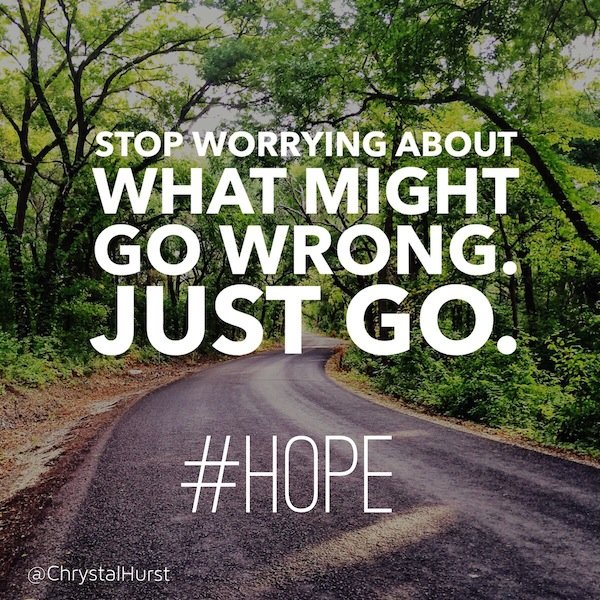 I don’t care what the weather man might say.

Get up and move.

…but those who hope in the Lord will renew their strength; they will fly up on wings like eagles; they will run and not be tired; they will walk and not be weary. Isaiah 40:31

You can choose to hope.

You can choose to believe the best.

You can choose to act as if the things will work out just fine.

If you have to choose between worry and hope… choose hope. Then act on it.

Be happy in your hope, stand your ground when you’re in trouble, and devote yourselves to prayer. Romans 12:12

And when you can’t change your circumstances you can absolutely change your attitude about where you physically have to be.

Stop worrying about what might go wrong. Just go. #HOPE

The worst is not always headed in your direction.

Worry is a habit that you can break.

Let’s pray about it. 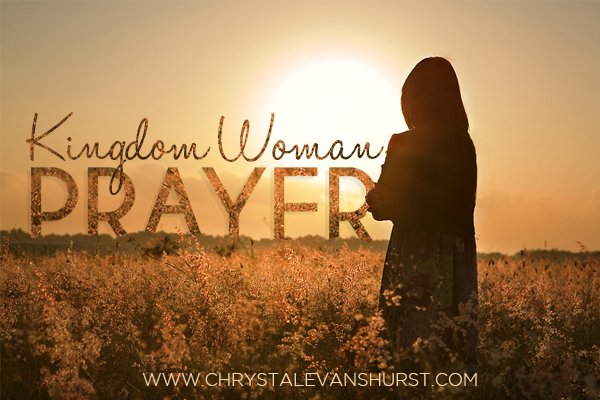 It’s a beautiful thing to see women praying for each other.

So here we go…

Do you worry?  You don’t have to.  Choose hope instead… #KingdomWoman #KWPrayer

Again… feel free to pray about anything that concerns you.

But if the topic of being “hope” resonates with you, pray in that direction.

So how exactly does this work do you ask? Keep scrolling for the details…

So excited about prayer this weekend!

2) Pray for someone else.
Then, look above you in the comment thread for the person who posted just before of you.  Hit “reply” and pray for them.  That way we make sure that everyone gets covered!

Please don’t feel insecure about your ability to pray for another sister or feel that her request is above your spiritual “pay grade.” Just pray with your heart.  God hears. He works with the words that we have and then He takes care of the rest.

3) Post your pic!
Make sure we can “see” you! Go to Gravatar.com so that others can see your face in the comments! (It’s easy! Just click on the green button labeled “Get your gravatar today” )

4) Pray more
Once you have left your prayer request and prayed for the person above you, if you have a few minutes feel free to reply and pray for any other comment/prayer you see in the thread.