Running in the Rain

Running in the Rain 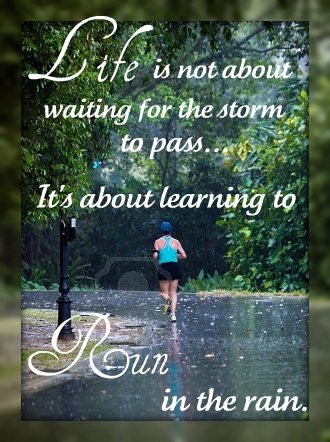 I’m fighting a daily battle with the fat demon. Yes, you read that correctly… the F-A-T D-E-M-O-N. I have actually named the entity that works against me everyday to make decisions that are not the best for my health. Part of the battle, well actually MOST of the battle revolves around what I put in my mouth for enjoyment, entertainment, sustenance. But I can fight this battle by getting up and moving too.

I’ll be honest and say that I wish I could fight the fat demon purely with exercise. For some reason, getting up and shaking my pa-tooty is a lot easier to wrap my mind around than giving up chocolate chip cookies (slurp…drool).

I’m sure there is a statistic out there about how much weight loss is tied to diet vs. exercise. But I can tell you from experience, food is most of the problem.

So I’ll have to conjure up a post about food at another time. Today’s blog is about the exercise part.

In my quest to move a little more, get a little stronger, and “tighten things up”, one of the things that I do is run. Now, I’m not a runner. When I run it’s probably not very pretty. My goal is not to make a 10 minute mile just yet. My only goal is to keep from tripping. My decision to pick one foot up and put it down in front of the other is based on the fact that if I only pick it up how far I feel I can then I might trip over my own two feet.

But I run because it helps me fight the fat demon.

Sure, I could walk. Nothing wrong with walking. Sometimes I do that too.

But when I run, my heart pumps a little harder, my thighs burn like fire, and I sweat like nobody’s business.

And why my stomach muscles ache the next day after a two mile run – I have no idea…but I guess they get in on the action somehow too.

It’s so much easier to run when it’s beautiful outside – when the temperature is just right, there’s a hint of a breeze, and the sun is peeking through wispy clouds. I can plug my earphones in my ears and disappear into the rhythm of the songs, attempting to convince myself that there is something wonderful about the experience.

Because, for me at least, most of the time it isn’t.

Last week, I made the decision to go for a run. A fairly short run because I was on a tight time schedule. I looked outside and it was a bit overcast. I knew if I went running there was a chance it might rain on me. I figured it was a short run so I probably didn’t have anything to worry about. I plugged those earbuds in and started moving.

About half way through, I felt one droplet on my nose and realized that I had made a bad decision.

The clouds in the sky looked like they decided to have a group meeting just at the moment that I started to run and something in that meeting went terribly wrong. The clouds changed from looking overcast, sad, and unhappy to looking dark, mean and angry. And those clouds were right over my head.

The droplets came faster and I could see by the rate of their increasing marks on the pavement that I was in big trouble. So, of course, I kept running. And I tried to run faster. I really did. But my little stumpy legs were already burning and just not willing to obey the electrical impulses being sent from my brain. I was like a mouse being spied out by an eagle. I didn’t have a chance.

It came D-O-W-N on my head. For real. It was a fight to keep running.

Running in the rain.

Now here I am running, doing something that I don’t thoroughly enjoy, in the rain, a situation that I don’t like to be in the midst of.

I realized that I had a choice. I could choose to stop running and minimize the discomfort of the situation, but then I would prolong the circumstances. I’d still be wet but at least I wouldn’t be struggling to breathe.

My life is not terrible, but just like anyone else’s I’ve had my fair share of challenging situations. I’ve experienced more than few rainy days. But I’ve learned that in those situations where I am trying to move and accomplish something during difficult times, I can stop, slow down, walk, or keep running. And my choice will determine how long it takes me to get out of the rain.

Sometimes it burns, I can’t breathe, and instead of fighting back rain drops, I might be fighting back tears. But I have a choice to keep running…. or not.

That day, I kept running, and God showed me that not only did I change my location – my atmosphere… my climate. I also realized that I could run a little faster, take a little bit more of the burn and breathe when my heart was pounding. He showed me that He made me stronger than I thought I was.

And all of this because I kept running in the rain.