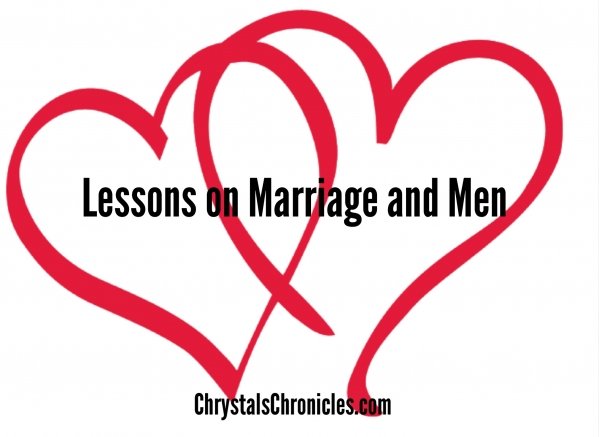 Recently, Jessie (Mr. Hurst) and I had an opportunity to have a couple of days together alone, sans kids, and therefore had a little more time than normal to look each other in the eye, remember that we actually do like each other, and have a chat about a thing or two.  My husband is a man of few words and deep thought.  I talk all the time… about pretty much A-N-Y-T-H-I-N-G so you can imagine what our little “chat” actually looked like!

Never the less, during our time together, there were a few things that I realized I’ve learned from Jessie over the years. I also realized there was a list forming in my head of things that he’s taught me that might be helpful to share with you! Some lessons he has taught me directly in the context of an argument deeply meaningful conversation. Other lessons I have received indirectly simply through the process of being married and learning how to relate to my husband over time.   So, either way, the following list of things has been Jessie taught and Jessie approved.

Caveat:  These are lessons I’ve learned from MY husband. Feel free to ignore any of the following if they don’t apply to YOUR man or YOUR marriage!

Because of the design of my personality in addition to the nature of my job (wife and a mom) and notwithstanding the inborn trait of womanhood — I think fast.  I am forced to multitask so that my world and my day run smoothly.  I get lots of practice making decisions on the fly, arranging and re-arranging the schedules of people under my roof, and keeping running lists in my head. I have developed the talent of seeing how one change in plans will connect to and impact the rest of the members in my household.  And I, like many home managers, have learned to wear about 25 different hats just to make it through one day.

So when I intersect with my husband to give him the “run-down” in whatever area of home life I may need to either inform him or get his input, I’ve had to learn that my husband needs time to think.  And if I expect him to move at my speed or at my pace, I will be sorely frustrated and disappointed.

The reality is that I want my husband to have time to think.  Many times, his thoughtful and well-processed responses add a dimension to my decision making that I had not considered or thought out as well as I thought I had.  Many times, he has a global view to the state of things that I miss because I am busy running around trees all day.  Much of the time, when I think I have come up with the perfect solution to a problem, I find out that his solution is much better than mine.  I’ve learned to appreciate that a man needs time to think — and that, with a little patience, that thinking can help me be even more effective in the role I have to play.

I like to talk. I have I made that clear already?  I hope so.  Because I do.  And  most of the time sometimes, I am more interested in saying what I have to say than in making sure that what I say can actually be heard. If the tone of my voice, inflections in my speech , or attitude accompanying my words communicate the wrong thing, I may as well be screaming like a banchee.  It will all sound the same to him.

We’ve heard over and over again as women that men have an innate desire to sense honor and respect, especially within the boundaries of marriage.  I won’t rehearse any of that here as I’m sure that you are as sick as I am of hearing that time and time again.  However, that doesn’t take away from the fact that it’s true.  Your words travel farther if they are laced with grace and humility.  The crux of your communication will make their mark if they are aimed properly and released with regard to the design of a man ears and the bent of his heart.

Your words travel farther if they are laced with grace and humility. ~ @ChrystalHurst #marriedlife

If the words that I speak travel from my mouth and carry pride, arrogance, superiority, conceit, or ego, Jessie simply can’t hear me.  I doubt anyone would be able to honestly. But I will especially notice Mr. Hurst shutting down, glazing over, and/or going mentally underground.

If I want Mr. Hurst to hear me, then the tone of my voice (both in volume and temperament) should be aimed at communicating that I value who he is and the position he holds in my life. Even if what I have to say is hard, difficult, or even a little objectionable, I’ve learned  that it is still possible to deliver the message in a tone that communicates love. Honestly, I’m still learning that lesson and probably will be for the rest of my life.

But He will ask me if I showed His love.

And the way I choose to speak to my husband is one BIG way that I can do that.

I originally intended to list five lessons that Mr. Hurst has taught me.  Because putting the first two into black and white has been so personally convicting and therefore draining, I will save the other three for later this week.  See ya soon!

CLICK HERE  for Part II of  Lessons on Marriage and Men

Also… be sure and tune in tomorrow for more details on our upcoming  One Month Journey.  It’s gonna be great to experience  #KingdomWoman together!