With the heart of the holidays fast approaching, I’m thinking a lot about food. Why? Well… during the holidays there will be lots of it. And historically, anecdotally, and factually, that hasn’t been a good thing for me.

If you’ve kept up with me on social media at all or read more than a few blog posts, you may already be aware of my ongoing battle with the #fatdemon. I’ve decided that just like an alcoholic might always struggle in an environment where there is alcohol or a drug addict may have to battle through a moment of weakness…

I might have a life-long struggle to exercise discipline with food.

Am I addicted to food?  I dunno.  All I can tell you is that chocolate chip cookies call my name, french fries make me smile, and sweet tea makes me want to dance.  If that defines addiction than I’m guilty.  If it doesn’t, then let’s just say I have a strong affinity for foods that will make me fat.

Make friends with her fat demon, that’s what. 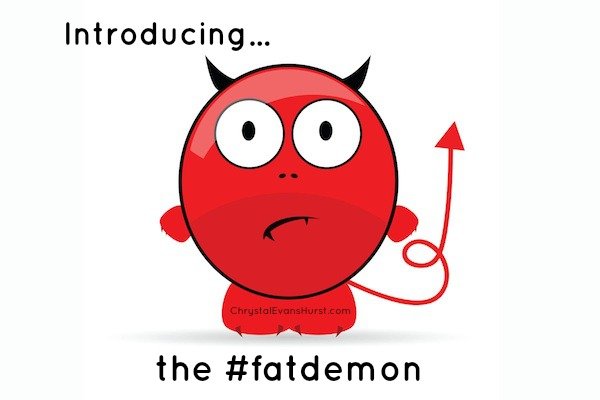 Hey… sometimes you have to put a face to a name.

Seriously.  I have decided that if my personal fat demon is going to follow me around for the rest of my life, I might as well acknowledge his (or her) presence and call it out by name.  There is something about naming it that gives me a sense of control, power, and lack of intimidation.

So now that I’ve completely weirded you out with the silly things I do to cope with my insanity, let me share a lesson I’m learning as I beat back the demon on a daily basis.

As I fight this battle with the fat demon, I basically have two weapons in my arsenal.

I can fight the accumulation of fat on my frame by choosing to eat less or move more.  Eating less food can mean eating lesser amounts of all kinds of food, or specifically honing in on eating less of certain kinds of food – foods with less fat, less sugar, and less FUN!

Moving more means finding something to do on a consistent basis that will allow me to burn more calories than I otherwise would chasing my kids around the house.  Walking, running, cycling, and strength training are a few of my current favorites to get my caboose in gear.

Now in our world we’ve seriously convoluted those two options.  We have thousands of weight loss programs, diets, books, centers, and magazines that tell us of all the different ways that we can do those two simple things.  And I’m not knocking any of that.  If it works for you than it works!

However, I’ve found that as the options multiply, they also convolute the basic bottom line: Eat less. Move more. 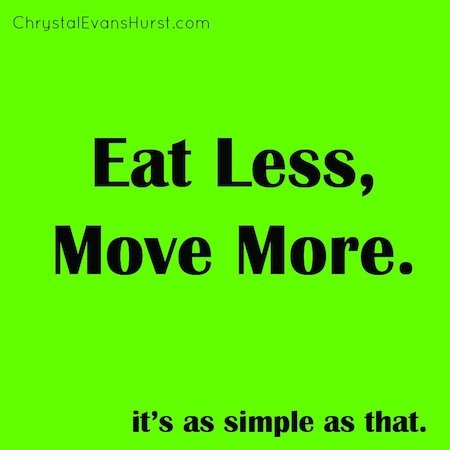 And guess which one I’d rather do.

If I could take my pick on which of those two options I’d use for losing weight if only one of the two would do it, I would MOVE MORE and then pay little attention to what I’m putting in my mouth.

But alas it doesn’t work that way.

However, I realized something recently that was seriously disturbing. One Saturday I went out for a run which ended up taking me almost an hour (I’m a slow wanna-be-runner remember).  When I looked at the nifty little app on my phone that calculated my calories burned from exercise, guess how many calories I had burned by killing myself for an hour.  You guessed it.  Right around 440 whopping calories.

That Panera cookie takes me a whole hour to burn off.  That’s just ridiculous.

It makes me roll my eyes just thinking about it.

But it’s the reality.

The reality is that while I can eat less or move more to burn calories and achieve a desired physical improvement, I can change faster by watching what I put in my mouth.

Yup… it’ll definitely preach.  So be sure and check out the rest of the “sermonette” in my next post and my lesson learned from the #fatdemon …

In the meantime, if you haven’t already downloaded one or both of the free resources from my site, do so today!

(Click on the links below to receive the downloads!)